Khachapuri and Khinkali among Europe’s 55 dishes worth traveling for

30.11.2013. Britain's Daily Mail gives a list of fifty five European Foods Worth Traveling For. Two Georgian dishes – khachapuri  and khinkali are among them.

‘Even if we don’t always remember the history behind the Colosseum, the significance of Tower of London, or who commissioned Versailles, after returning home from a trip, we can almost always remember what we ate while we were there.

Georgian dish that is on Daily Mail’s list of foods worth traveling for is khachapuri: ‘This indulgent dish is like a blank canvas for different flavors. From Georgia, khachapuri is cheese-filled bread often topped with egg and butter. Because of its simplicity, there are many variations, and cooks often add potatoes, various cheeses, and sauces to the dish’.

Second Georgian dish on the list is khinkali. ‘These Georgian dumplings are filled with mixtures of raw, spiced meats and various vegetables. The dumplings are prepared by being stuffed and then boiled, trapping the meat’s juice inside as the filling cooks. The result is a delicious, precious liquid that customers try not to spill as they eat the dumpling’, the Daily Mail informs.

30.11.2013. The National Tourism Administration is implementing a large-scale marketing campaign in Ukraine. Due to a greatly increased interest towards Georgia in terms of the tourism, a state agency considers Ukraine one of the  priority markets in terms of  attracting tourists.

Georgia on my mind

29.11.2013. A couple of years ago, I had an incredible opportunity to travel to Georgia, thanks to my friend Alla Wagner at Lotus Vini. I wrote about my trip last fall for City Palate magazine, a food magazine based in Calgary, Canada. Since the story isn’t available online, and that issue of the magazine is no longer on newsstands, I thought I’d repost it here. Sometimes I still dream about that trip. It’s a beautiful, wonderful, friendly country and I hope to one day take my entire family there.

The scent of woodsmoke. An ancient Lada car, packed with watermelons — on the roof, in the trunk and crammed into the passenger seats. Bushels of corn lit by fall sunshine. A lamb carcass — or is it a goat? — outside a shack by the side of a gravel road. A bloodied cleaver is jammed into a butcher block beside it. Nearby, men squat and talk. Flies buzz. Then, a child’s small, smiling face, bright as a star.

I memorized everything I could see while travelling through the small towns and countryside in the republic of Georgia, a small but fierce country that borders the Black Sea to the west, Russia to the north, Turkey and Armenia to the south and, in the southeast, Azerbaijan.

At every corner, it was clear that Georgia is a country of contrasts — eastern and western influences, rural and urban. The capital city, Tbilisi, features designer shops, lively bars and fancy restaurants, but a visit to the countryside is a step back in time. Everywhere I looked, I was mesmerized by Georgia’s fascinating history and its rich food and wine culture.

26.11.2013. The Secretary General of UN World Tourism Organization, Taleb Rifai, ranked Georgian tourism development as the best in the region. Furthermore, at the annual UNWTO & World Travel Market (WTM) Ministers' Summit held in London on 5 November 2013, it was noted that through closer coordination of tourism and aviation policies, air connectivity can be improved, resulting in sustained growth of the tourism sector.

Giorgi Sigua, Head of Georgian National Tourism Administration, also participated in the event. He met the secretary general and discussed UNWTO World Tourism Barometer that estimated the rate of growth of tourist arrivals in Georgia as the highest in Europe. Sigua made a speech at the Ministry, where he discussed trends and reforms of Georgian tourism.

He admitted that cooperation with UNWTO is crucial for Georgia, since UNWTO is a good platform for disseminating information on the country’s achievements. Sigua also underlined importance of UNWTO Tourism Highlight that ranked Georgia as one of the fastest growing tourist destinations in East and Central Europe. “This is important, for it catches the world’s attention,” said Sigua. “[UNWTO] publications are very reliable and influential information sources for the tourism industry.”

15.11.2013. Head of the Georgian National Tourism Administration Giorgi Sigua does not agree with the statement made by his predecessor and explains the increased number of visitors by the promotional activities carried out by the government in the current year.

The former Head of the Tourism Agency Maia Sidamonidze  says that  the new government should  not consider the  increased number of  tourists as their own merits, because the strategy does not bring results in 3 months. I hope that the current leadership of the Tourism Administration does not think that the increase in the number of visitors is their merit, " - says Sidamonidze in an interview with " Business and management” magazine.

While the current administration responds to  Sidamonidze with facts and says that this year the number of tourists has increased the most from  Russia , Ukraine and Iraq due to  the advertising activities in these countries.

Travel and tourism to Georgia: making sense of definitions and numbers

08.11.2013.Travel and tourism is one of the largest and fastest-growing service industries globally. According to the World Travel and Tourism Council (WTTC), the industry’s direct contribution to World GDP in 2012 was US$ 2.1 trillion (2012 prices) and it supported 101 million jobs. Taking account of its combined direct and indirect impacts, WTTC assesses Travel & Tourism’s total economic contribution at 9% of World GDP in 2012, 1 in 11 jobs, 5% of total economy investment and 5% of world exports (Economic Impact of Travel and Tourism 2013, Annual Update, WTTC)

The tourism industry is of particular importance for Georgia, which, like many other developing countries, is short on physical capital and technical skills but is very well endowed with historical sites, original traditions, pristine landscapes and a culture of hospitality. While unlikely to serve as an engine of long term growth, the tourism industry’s added advantage for a country like Georgia is that it can absorb some of the surplus labor currently under-employed in the low skill and low productivity agricultural sector.

Georgia is famed for its traditional home cooking, but watch your weight

01.11.2013. The Quiet Woman pub, in Georgia's Black Sea resort of Batumi, was celebrating its recent reopening. A strong smell of fresh paint was cloaked by thick cigarette smoke. From behind the bar, a teenage girl in a tartan miniskirt yelled "free beer" over the din of a cover band warbling Angels by Robbie Williams into a scratchy microphone.
Tables of chain-smoking men swayed with their pints in hand, as a Spanish football match played on big screens overhead. If there was a place to try authentic Georgian food, this pub, with its menu of burgers and chips, probably wasn't it. I left the inappropriately named pub behind, and headed out onto the deserted Piazza, Batumi's newly built town square. Its 10-storey clock tower, which doubles as a boutique hotel, was lit up and shone centre stage, but all the tables and chairs of the cafes had been moved inside until a fierce storm blew over.
In many households home-made wine is drunk with abandon
Opposite the pub, freshly painted in wave-crest white, was a modern Georgian restaurant called Mimino, offering a beacon of light. Inside, cheery waitresses, this time in turquoise airline-style uniforms, stood ready to serve traditional food.
The port city of Batumi is the capital of Ajara, an autonomous corner of southwestern Georgia, which proudly has its own culinary heritage. At first glance, the menu did not appear easy on the hips. I pointed and ordered a selection, not knowing what to expect, except inevitable weight gain. 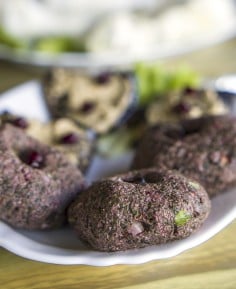 Vegetarian patties
First up was a steaming hot plate of Ajarian khachapuri, perfect wet-weather food. A cross between a canoe-shaped pizza and naan bread, it arrived awash with cheese and on the top wobbled an almost raw egg, swimming in a pool of butter.
Finger-thin sulguni rolls filled with cottage cheese and mint arrived on plain white plates and were moist and light, like fresh spring rolls. Still at the appetiser stage, the airline waitresses next delivered small plates of pkhali, vegetarian meatball-shaped patties, which were made of spinach, beetroot and leek. This was accompanied by plump tomatoes, balsamic glaze and lashings of dill.
Main courses were meat-centric, with signature dishes of veal chakapuli (braised chops, although usually lamb), pork odjakhuri (pork with potatoes and tomatoes, baked in a clay pot) and fried lambs' brains. I opted for filleted trout, which was flaky and filled with finely chopped walnuts and herbs.
Lakes, rivers, mountain valleys and fertile land provide a year-round bounty for Georgia and the fruits of this natural abundance can be seen daily at every meal time. During Soviet times, Georgia (the republic declared independence in 1991, shortly before the collapse of the Soviet Union) was famed for its home cooking and it remains the most foodie destination in the region.